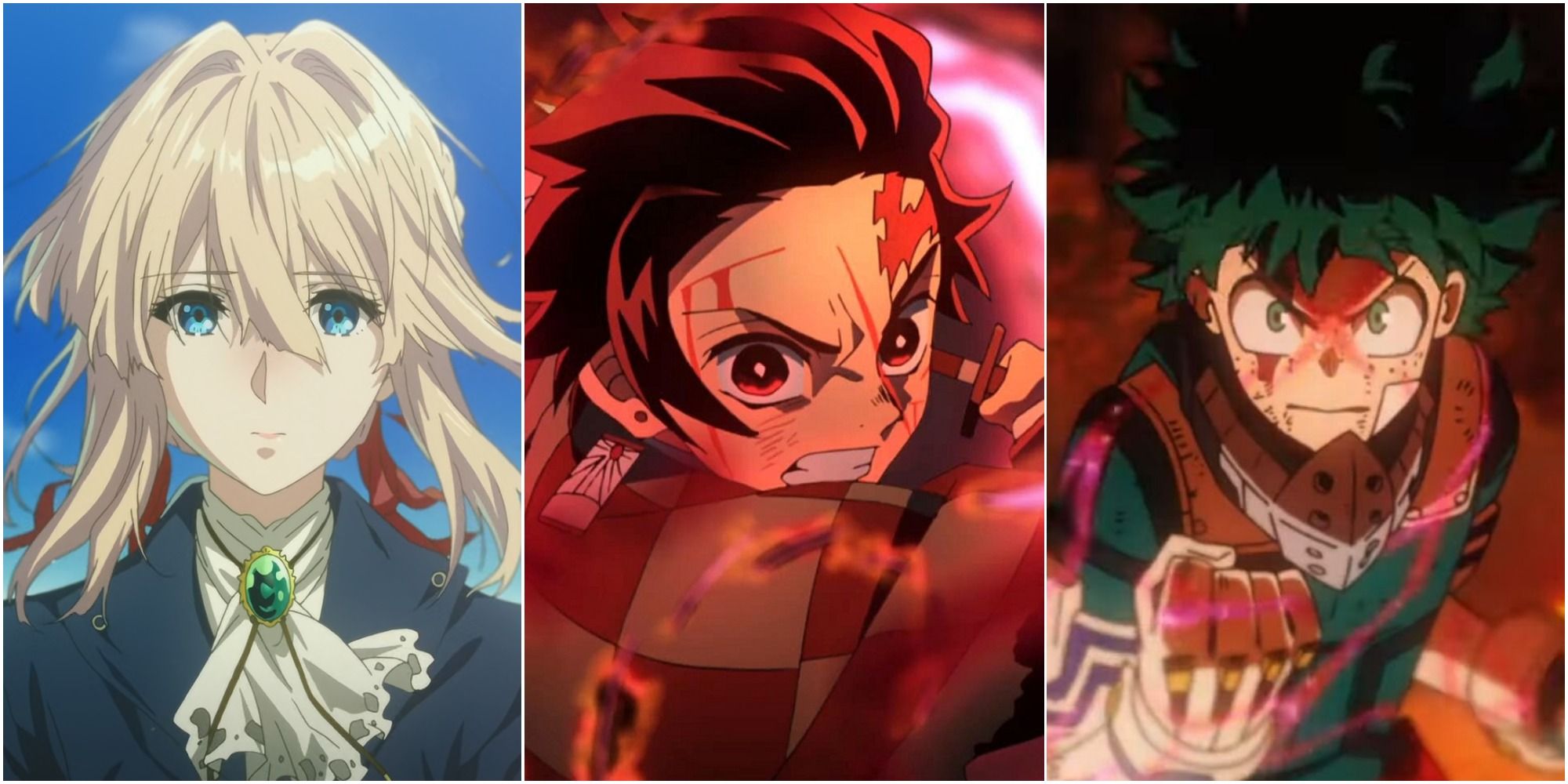 10 best animated movies of 2020, ranked (according to MyAnimeList)

Many 2020 film and television projects have been pushed back to 2021. For this reason, it was clearly not a typical year for the entertainment industry. The anime medium hasn’t been spared by the series of delays either, but despite the changes to the 2020 anime schedule, there are still plenty of long-awaited anime films that have been released throughout the year. and graced the screens of viewers around the world.

While some of these films were standalone Netflix originals, others were long-awaited sequels to renowned anime franchises. The best of them have been ranked on the site, MyAnimeList (MAL), which averages user scores and gives fans great options for what to watch next.

Updated November 15, 2021 by Jake Koran: When it comes to animated films, 2020 has not shied away from releasing some incredible titles. Some of them were sequels to other beloved films or entirely new to the big screen. Many of the best animated films of 2020 have easily connected with viewers, potentially becoming instant classics among fans. While some of these 2020 animated films may require prior knowledge of their respective franchises, the time investment is well worth it to get the most out of the films.

Similar to Steven Spielberg’s Minority report, a great tech-noir film, Psycho-Pass takes place in a world with a flawed justice system. Even before a crime is committed, citizens with criminal intent are identified using a complex system and brought to justice using appropriate measures.

The Psycho-Pass franchise involves many films. Among them, Psycho-Pass 3: First Inspector ranks somewhere near the top. However, unlike most other films that adopt spinoff stories, this one serves as a direct continuation of Season 3. To grab this one, a viewer must first go through Season 2, which in itself is quite intriguing. with its nihilistic and philosophical nuances. .

The stranger by the beach is about an aspiring novelist named Shun and a high school student named Mio, who meet on a beach and romantically hook up, only to be separated when Mio has to leave. The two reunite three years later and must decide whether to attempt their relationship, which is complicated in part due to the homophobia Shun has experienced in the past from those close to him.

The film is a beautiful exploration of these two characters which greatly enriches their personality. The story is also amazing and is both heartwarming and heartbreaking at times. It has been very well received in the short time since its release, and it looks like it will only continue to grow in popularity over time.

Although the shounen-ai genre remains relatively unexplored, from time to time a large series like Given happens and changes everyone’s perception. Serving as a follow-up to the 11-episode show, the Given the film focuses on other supporting characters from the anime. It offers a deeper look at these interesting characters and helps audiences connect more with them.

RELATED: 10 most powerful anime characters who travel through time

While the show was devoted to romantic developments between Ritsuka Uenoyama and Mafuyu Sato, both of whom are part of a rock band, the film also highlights the romantic relationship between the band’s bassist, Haruki Nakayama, drummer, Akihiko. Kaji, and Akihito’s ex. boyfriend, Ugetsu Murata. The characters all have excellent chemistry and help to make Given in such a fun movie to watch.

Due to be compared to Pokemon franchise, Digimon never achieved the fame and recognition of other popular shounen of the late 1990s. Even so, he attracted a fan who has remained loyal to him even after all these years, with some of the best Digimon Games still stands today.

Celebrating the 20th anniversary of the anime, Digimon Adventure: Latest Kizuna Evolution is the third and final installment of the Digimon Adventure film trilogy. As suggested by many reviews on MyAnimeList, it brings a satisfying conclusion to the long-running franchise and is a reminder of all the elements that initially made the series so great. For anyone looking for a throwback to the good old shounen era of the ’90s, this one does the trick.

After the events of the 2014 film Stand by Me Doraemon, Nobita and Shizuka are about to get married, but Nobita first wants to go back in time to meet her beloved grandmother, who died as a child.

The following film features a series of moments that are both fun and heartfelt as Nobita struggles with her self-confidence and tries to present her future wife to her grandmother, as she wishes. Stand by Me Doraemon 2 draws fans in many emotional directions and has a lot of likable and endearing characters, making this one that fans of the franchise and newcomers alike will appreciate.

The plot of Josée, the tiger and the fish revolves around Tsuneo, a young man who dreams of diving around the world, and Kumiko, a young woman named “Josée”, is a person in a wheelchair and dreams of being able to travel and to have experiences that she has not yet. Tsuneo becomes Josée’s keeper, and the two begin to find solace and pleasure in each other’s company.

The film is not the first adaptation of the source material, but it is exceptionally well done, with beautiful animation and great performances from the voice actors. The romantic comedy / drama film has plenty of emotional moments audiences can connect with, and with fantastic presentation in plenty of footage, Josée, the tiger and the fish is sure to be a favorite among fans of heartfelt stories.

It’s hard not to judge an anime by its animation style, but in the case of Made in the Abyss, its outward appearance is very deceptive. Its chibi-style animation might make new viewers feel like it’s for kids. However, given its darker themes surrounding death, grief, and cosmic horror, that’s far from the case.

In The dawn of the deep soul, the central characters dive deeper into the gruesome abyss that lies in the middle of their small town. Now in the fifth layer of the abyss, they cross paths with Prushka, who claims to be Bondrewd’s daughter. As always, they now have to be careful with every step they take and make big sacrifices before they can dive deeper into the sixth layer of the hole.

Often billed as one of the best anime of the past decade and certainly one of the best demon anime all time, Demon slayer continues to please his huge fan following with the movie sequel, Mugen train. With Tanjirou and the Demon Slayer Corps back to the fore again, the anime follows their action-fueled investigations into the mysterious disappearances on a train. They don’t realize there’s a lot more on the train than it looks.

Filled with glittering battle scenes, jaw-dropping art, and all the good stuff that fascinates shounen fans, the Demon slayer the movie never leaves a dull moment.

The Destiny series is one of the most important anime franchises. It has it all, spinoffs and gameplay adaptations, which can certainly compete with some of the others. anime based games worth playing, OVAs and movies. Heaven’s Feel III: Spring Song is the long-awaited final part of the Destiny / Stay the night trilogy of films and it does not disappoint.

Picking up where its predecessor left off, the film begins at a critical moment in the Fifth Holy Grail War. A hidden enemy finally emerges, and the main heroes learn that there is a lot more at stake for them than they anticipated. In its tense two-hour span, the film keeps viewers on the edge of their seats and resolves the morbid Holy Grail war in the best possible way.

Located in the aftermath of a war, Violet Evergarden unfolds like a rite of passage for a young woman, Violet, who has been a weapon all her life. With her old life behind her, she sets out to learn what it’s like to be human and understand the true essence of her lover’s last words.

The film continues this journey with the greatest depth, as Violet retains her last hopes of finding her lost lover. While at it, she continues to light up the lives of others by writing beautiful letters like an “Auto Memory Doll”, bringing even more emotion to this already beautifully captivating film.

FOLLOWING: The most anticipated upcoming anime in 2022


Next
Each fully Evolved Pure Ground-type Pokémon, ranked by strength

For a long time, Dhruv aimlessly explored the world of things that did not interest him. But when he finally realized that writing was his true calling, he took a leap of faith and decided to follow his dreams. The rest is history. Since then, he has written over 2,000 articles online, covering a myriad of topics including fitness, personal development, cartoons, movies and television. Using Screenrant as a platform, it is now on a mission to learn, grow, and flourish through all things cinema.