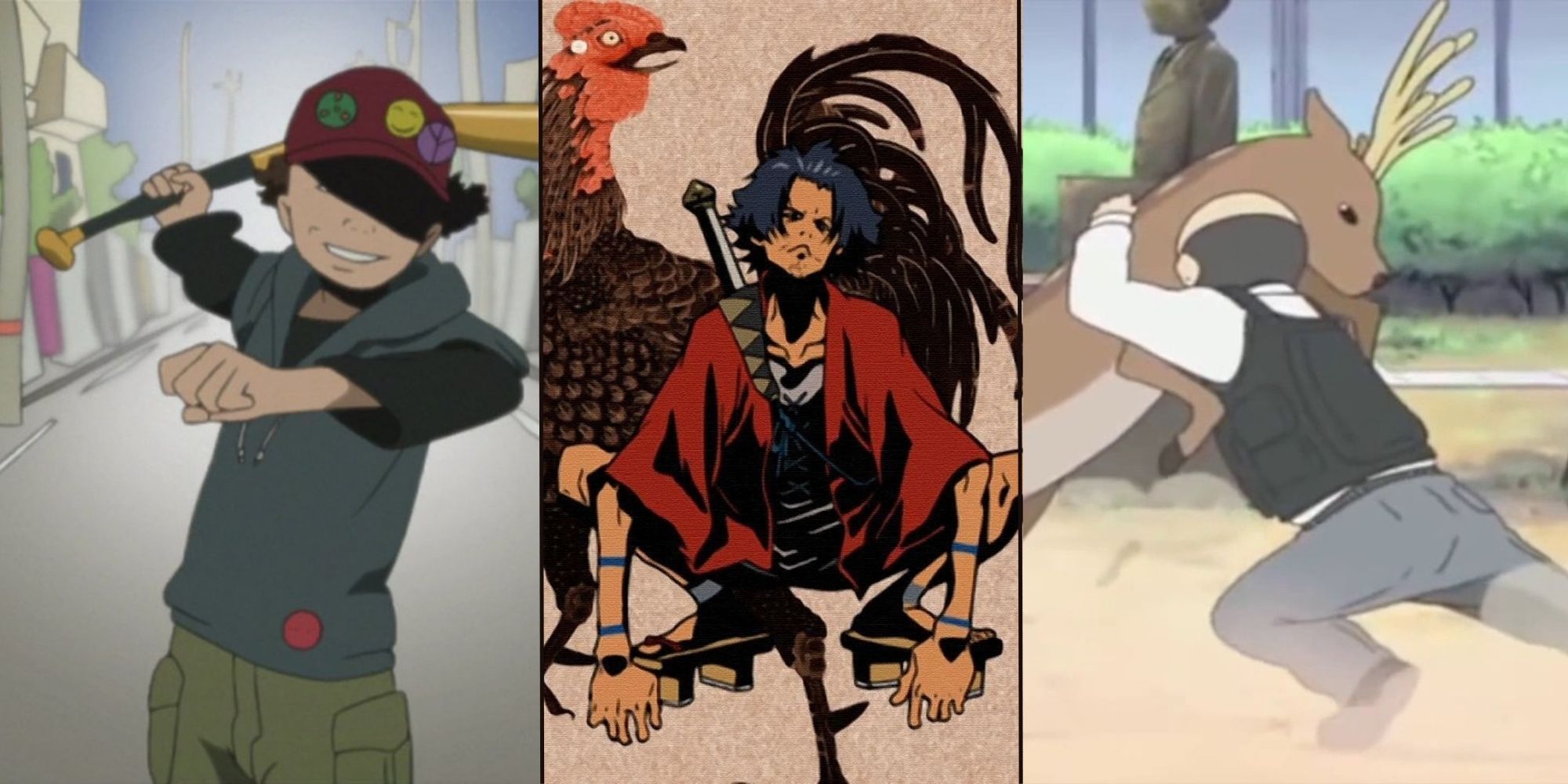 Whether it’s a college student preparing for your weekly tests and quizzes, or someone working in the office or from home on a 9 to 5 schedule during weekdays, one thing the two demographic groups must have in common would be the constant desire for vacations to arrive earlier. Luckily, everyone still has the weekend to be grateful for a short break from a hectic lifestyle. And a weekend is a great time to enjoy these concise yet very memorable anime.

RELATED: Best Drama Shows With Only One Season

Anime can take the form of a feature film or a TV series, the latter ranging from over 7000 episodes like Sazae-san to shorter runtimes that tell a big, immersive story in 12-24 episodes.

Satoshi Kon has mastered the art of providing audiences with mind-blowing stories that would give Christopher Nolan and David Lynch a race for their money. In addition to a famous filmography including perfect blue (1997) and Tokyo Godfathers (2003), Kon’s only TV anime contribution – paranoia agent (2004) is a suspenseful and mentally tormenting creation equivalent to its cinematic predecessors.

The psychological horror animated series follows a series of victims who were allegedly attacked by a minor nicknamed “shounen bat” or “lil slugger”. Each victim eventually becomes the center of the story, bringing their secret lives and untold issues to light.

Fancy an animated rom-com series that pokes fun at the stereotypes and clichés bombarding the shoujo genre? An anime that should have received a second season, Ouran High School Host Club (2006) may seem all rosy and dreamy on the surface, but it’s one of the pioneering anime to demystify gender roles and demonstrates that not all girls are damsels in distress.

After accidentally breaking an expensive vase, poor high school girl Haruhi Fujioka must work for the school’s infamous Host Club, where handsome boys with diverse personalities entertain female students. Often mistaken for the opposite sex, Fujioka becomes natural in her “work” while dealing with her male colleagues.

Banana Fish (2018) centers on Ash Lynx, a fugitive turned teenage gang leader in New York City, and his adventures in search of the mysterious “Banana Fish”, the last words spoken by his older brother.

The detective adventure series is not only notable for its extensive action sequences and mafia interference, Ash’s relationship with Japanese photographer Eiji Okamura does not overtly sexualize homosexuality, which has painted a more positive portrayal homosexual relationships. The series not only appeals to hot-blooded action series fans, but also appeals to female followers who have a penchant for “boys-love” material.

One of the best anime netflix created, crybaby devilman (2018) is not for the faint-hearted with its gratuitous violent and sexual content. Undeterred by a highly controversial ending and unusual animation style, the cutting-edge supernatural horror anime series has garnered many fans due to its superb storytelling, inclusive characters, and faithfulness to the manga.

Based on Go Nagai manga, evil manthe series is set in the 21st century rather than its original 70s setting. It centers on Akira Fudou, who accidentally merges with the devil Amon and gains evil powers to defeat other demons, though he still has a whiny heart.

From the same creators of cowboy bebop (1998) and Terror in resonance (2004), the 2004 samurai action anime series is the only anime to ever combine the idea of ​​traditional Japanese sword fighting with a stylized hip-hop soundtrack.

Samurai Champloo oversees the journey of a trio of peculiar individuals who set out to find a samurai who smells of sunflowers. Their expedition doesn’t always go smoothly as the tea waitress Fuu always has to keep the outlaw Mugen free and taciturn. ronin Jin to kill each other.

The 2008 sports anime’s tagline “Nobody wins but me” perfectly encapsulates the series’ main climax and anti-hero Toua Tokuchi. an out (2008) perfectly balances baseball and sports betting by constantly pitching the prodigy Tokuchi against baseball players from various walks of life in one-on-one matchups called “One Outs”.

RELATED: Sports Anime and the Art of Relability

Tokuchi’s skills unwittingly landed him a spot on a mediocre baseball team, but under a special contract: throwing an out will earn him five million yen while giving up a run will cost him fifty. Audiences will be entertained by an out for Tokuchi’s ingenious ways of outmaneuvering his opponents and exceeding audience expectations.

Released at the end of 2016, Yuri!!! On the ice (2016) became a smash hit mainly for the enthusiastic reception from viewers around its same-sex relationship between up-and-coming Japanese figure skater Yuri Katsuki and his Russian mentor Victor Nikiforov, although some critics deemed it unrealistic.

Praised for its meticulously executed choreography and portrayal of anxiety, the anime is certainly exceptional in providing a window for fans interested in the world of figure skating, especially in the modern setting of overt social media exposure.

A surreal comedy anime featuring a school principal struggling with a wild deer, a juvenile scientist with her detachable robot maid and a talking cat as well as many other strange occurrences, Nichijou (2011) is one of those anime that is just perfect for anyone having a bad week.

RELATED: Anime Series That Will Give You A Dopamine BoostAlso known for its English title my ordinary lifethe life of the characters Nichijou is anything but ordinary. The anthology series primarily focuses on three childhood friends as they experience the absurdity of hypernormal phenomena invading their mundane high school lives.

Calling all cat lovers and introverts! Because My roommate is a cat (2019) is definitely not an anime series to miss.

The slice-of-life anime details the budding relationship between Subaru Mikazuki, a socially awkward crime novel writer, and a stray cat he ends up bringing home called Haru. After his parents die in a car accident, Mikazuki becomes increasingly withdrawn from society, but having Haru in his life makes his view of the world much less daunting.

death parade (2015) questions viewers about the idea of ​​what happens after death and answers itself by becoming one of the best death game-themed TV series. In the world of death paradea chosen few are sent to a bar called Quindecim staffed by bartenders who will host a series of games determining who should go to heaven or hell.

In these games of life and death, each participant’s true nature and background stories will slowly be revealed. From darts to air hockey, the range of games provide good entertainment while making viewers think about the fate of its participants.

NEXT: Some Amazing Anime Spin-Offs And Others That Disappoint

Recently graduated from Monash University with a bachelor’s degree in media communications and a major in film studies. She is a new independent writer passionate about international cinema. His favorite directors are, but not limited to, Martin Scorsese, Wong Kar-Wai, Krzysztof Kieślowski and Juzo Itami. When she’s not busy writing or daydreaming, Jia Yee Bridgette likes to spend her free time watching all the movies she can dig into, listening to songs mostly released before 2010s, and occasionally indulging in the act of drinking beer. Follow her on Letterboxd for personal thoughts and rants: https://boxd.it/1PrwF.