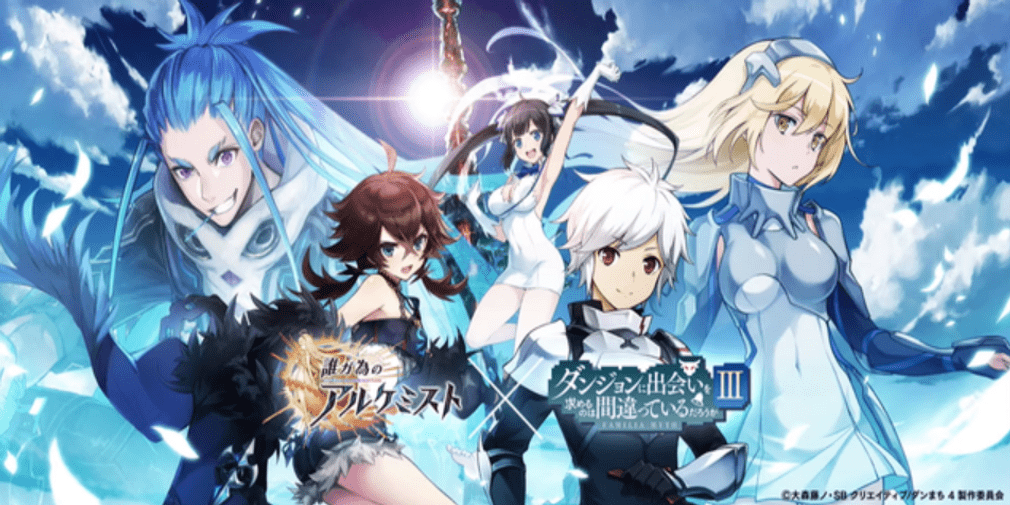 The hugely popular MMORPG Alchemist Code, developed by gumi incannounced a brand new in-game collaboration today. Tied to the equally popular anime series Danmachi – Is it wrong to try to flirt with girls in a dungeon?This event will allow players to summon various characters from the animation as well as a login bonus.

First, the heroes available in the gacha pool. We have main character Bell Cranel. Bell is, of course, the protagonist of Danmachi, and his abilities feature notable moves he uses in the anime, proudly wielding his blade. Next, Hestia. The love interest of the series, Hestia wields magical abilities bestowed on her by the goddess, making her a mage if you add her to your party. And finally, Ais Wallenstein. Think of Ais as the secondary protagonist, a blond-haired knight who gracefully uses her rapier to battle her opponents.

Beyond the gacha summon, we also have a login bonus event for the duration of this event. If you log in daily, you can get the following rewards:

You can also take on a few co-op themed quests that will give you various rewards ranging from upgrade materials to new titles to display on your profile. Most of these quests can also be completed using the multiplayer feature, so join your guild and get ready to celebrate one of anime’s most popular franchises!

Whether you are a fan of the anime or a newcomer interested in the MMO gameplay of Alchemist Code, if you are interested you can find the game for free on both google play and the App store as well.