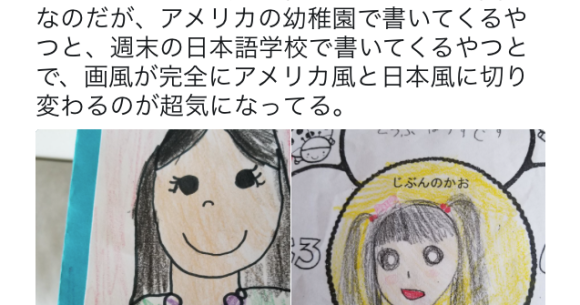 Anime art vs Western art: the changing face of a Japanese schoolgirl’s self-portrait

When this kindergarten goes to school, her self-portraits change depending on whether she is in a Japanese or American environment.

Living another culture, at any age, brings joy, challenges and little self-discoveries along the way. For a Japanese girl currently growing up in the United States, navigating cultural differences and adjusting to her own identity is something she does on a daily basis, as she attends a regular American kindergarten during the day while studying. in a Japanese school on weekends. .

Recently her father, CEO of a Silicon Valley startup, shared these self-portraits drawn by his daughter at school, showing that despite her young age, she already understood the difference between Japanese and Western drawing styles. .

It is true that the image on the left, on which is written “I love Mom”, is drawn in a typical Western style, showing a girl with long dark hair, black eyes and a big smiling mouth.

On the other hand, the image on the right, drawn in the Japanese school for girls, looks more like a typical Japanese style anime drawing. In the circle that says “My face” is a girl with a two-tailed hairstyle, a pink hair ribbon, a small mouth and big shiny eyes.

As the difference between the selfies stood out with the girl’s father, Japanese Twitter users quickly shared their own thoughts, leaving comments such as:

“I also went to an American elementary school. When I left home it was as if I had gone into “American mode” and when I got home I went into “Japanese mode”. It was like a switch that I could turn on and off.
“Surprisingly, children are able to read situations from a young age, so it is natural for them to understand what is considered ‘normal’ in different environments. “
“It looks more like the photo on the left is of her mother, but the difference in styles is still obvious. Maybe they use Japanese-made pencils in the Japanese school, which helps make it look more lively? “
“I did this when I was younger. When I think about it now, it was like I had different personalities at my regular school and at the Japanese school. Everything from my drawings to the color choices and my writing style changed depending on where I was. It wasn’t intentional, it just happened naturally.

According to many comments, this kind of fluidity in drawing style is a natural occurrence for people straddling the intercultural divide, and even adults who move abroad find themselves picking up new habits and mixing them with. theirs.

Yet regardless of the influences on her drawing style, this girl clearly has an artistic talent, so I hope she will continue to draw. With one foot firmly planted in two different worlds of art at such a young age, there is no limit to his artistic potential!