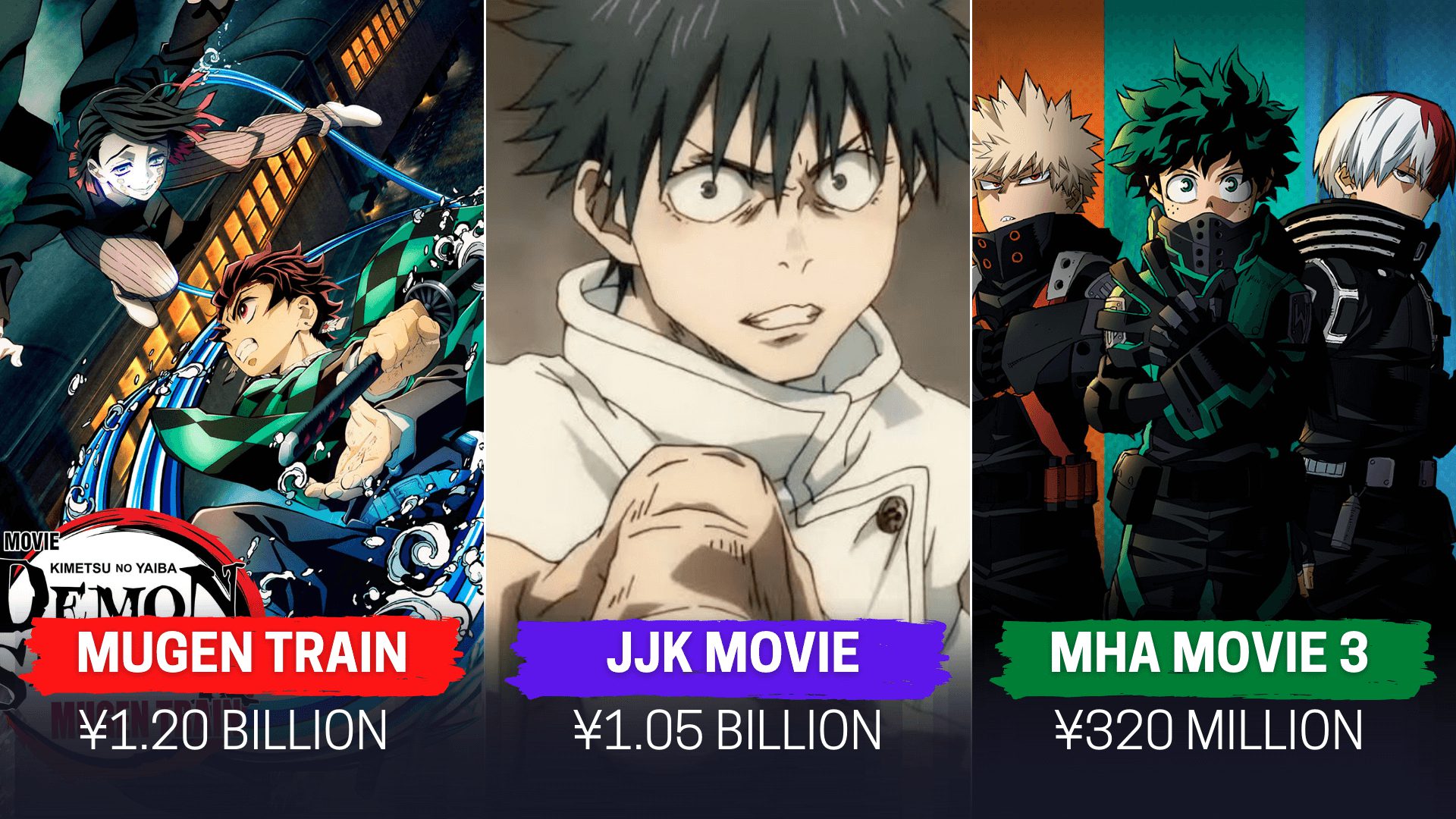 The world of anime is divided into two popular categories, TV series and movies. Luckily for us, Japan always offers the best of both worlds. With 4 months already passed this year, few good anime movies have been released while many movies released last year continue to collect money and continue at the box office.

Japan has become the hub of series and animated films with the advent of the century. The studios focus on the smallest details to make sure fans get what they deserve. 2021 has been another big year for the anime industry. Although we have witnessed some of the best anime series, we have also gotten some of the best anime movies ever made.

Let’s take a look at the highest grossing anime movies through March 2022.

Yes, you read that right, even after almost 1.5 years of its release in Japan, Demon Slayer Mugen Train is still running in select theaters around the world. Mugen Train has become the best animated film ever made. The film was released on October 16, 2020 in Japan and debuted in US theaters 6 months later on April 23, 2021. After 220 days after its release, Demon Slayer: Mugen train crossed the 40 billion yen mark. and became Japan’s highest-grossing film.

The film continues where the 1st season of the hit show ended. Tanjiro along with his sister Nezuko, his friends Zenitsu and Inosuke board the Infinity Train (Mugen Train) to investigate the disappearance of passengers and the disturbance caused by a demon on board. They are also assisted by the Flame Hashira Kyojuro Rengoku. The film is adapted from Koyoharu Gotouge’s manga of the same name. Stunning visuals, an impressive storyline, and heart-pounding action scenes are what made this film a global hit. The film has collected $503 million to date and became the highest-grossing film of 2020 worldwide.

Jujutsu Kaisen 0 is the prequel to the hit 2020 Jujutsu Kaisen series. Both Jujutsu Kaisen and Jujutsu Kaisen were adopted from the manga of the same name created by Gege Akutami. The film is produced by MAPPA (famous for the last season of Attack on Titan). Jujutsu Kaisen 0 was released on December 24, 2021 in Japan and has yet to hit other theaters worldwide. In fact, it is set to release in the United States on the 18th of this month.

The film focuses on Yuta Okkotsu who is haunted by the spirit of his childhood friend Rika. He is cared for by jujutsu wizards and learns to channel Rika’s spirit energy to help others. The film also marks the return of various characters introduced in the first season. The cast of the film includes antagonist Suguro Geto, jujutsu wizards Maki Zenin, Toge Inumaki, Panda alongside the very famous Satoru Gojo. The film has grossed over $107 million so far; this will definitely increase once the movie is released soon in other countries around the world.

This movie is part of the Neon Genesis Evangelion (NGE) franchise. NGE manga is written by Yoshiyuki Sadamoto. The manga debuted in December 1994 and ran until June 2013. The show is so popular that it has made way for various audiobooks, video games, a novel, and numerous blockbuster movies. This film is the fourth and final installment in the Rebuild of Evangelion franchise.

The film continues where the last part left off. Shinji has lost his will to live but he soon learns what hope is after arriving at a survivor camp on the outskirts of Tokyo-3. As Evangelion answers questions, other questions tend to arise. The 25-year franchise has finally come to an end, that too with a happy ending. The film was written and produced beautifully. It became the 2nd highest grossing film of 2021 only behind Jujutsu Kaisen 0 with a box office collection of $102 million.

Gosho Aoyama’s manga as Case Closed known as Detective Conan has been adopted into a long series of movies. Case Closed: The Scarlet Bullet is the 24th installment in the series. The film was originally scheduled for release in April 2020 but was postponed for a year due to the COVID-19 pandemic. Nevertheless, the film was a huge success.

The film follows Conan as he tries to uncover the kidnapping of the top executives of the World Sports Games in Japan. While doing so, Conan also discovers that these kidnappings are somewhat related to the one that happened 15 years ago in Boston. The film has a running time of 110 minutes and earned $95 million at the box office. The film is still playing in select theaters, so expect its collection to grow by perhaps a few million more. The next movie in the series named Detective Conan: The Bride of Halloween is set for release on April 15 this year.

The film follows the story of a 17-year-old high school student named Suzu Naito. She enters the popular virtual world of ‘U’ and becomes an international singing star. Soon, she becomes emotional as she attempts to find the identity of a dragon who crashes one of her virtual concerts and evades the authorities. The story was beautifully crafted with memorable characters. To date, the film has collected $63 million, becoming the 3rd highest-grossing Japanese film of 2021. The film is still playing in select theaters in Japan.

It is a superhero film based on the My Hero Academia manga created by Kohei Horikoshi. The film takes place during the manga’s Endeavor Agency arc. Deku is joined by his classmates to stop a terrorist plan spreading around the world. The film was released on August 6, 2021 in Japan. 2 months later, it was released in the USA on October 29. The film received generally good reviews from critics and also received praise for its animation. The film’s box office collection is registered at $46 million worldwide.

Sword art online is a very popular anime adapted from the novels of the same name written by Reki Kawahara. The film debuted in Japan on October 30, 2020 and became a hit very quickly. The adventures of Asuna and Kirito unfold as they traverse each floor of Aincrad to reach floor 75, this film fills in the gaps in the many time skips.

Kirito and Asuna’s encounter is the main subject of the film. It also covers events on the 1st floor of the Aincard. There is also a focus on Asuna’s struggle to adjust to her new life and realities. Further player details are revealed as the story progresses. The film was well received by fans and critics. The film earned $13 million. A sequel to the film has been announced for this year.

These are the movies that have performed so well so far at the box office. The Fruits Basket Prelude was also released a month ago, but it didn’t gain much from those movies. That’s why it’s not on this list. Let us know if there’s a movie we missed or you’d like to see on this list.