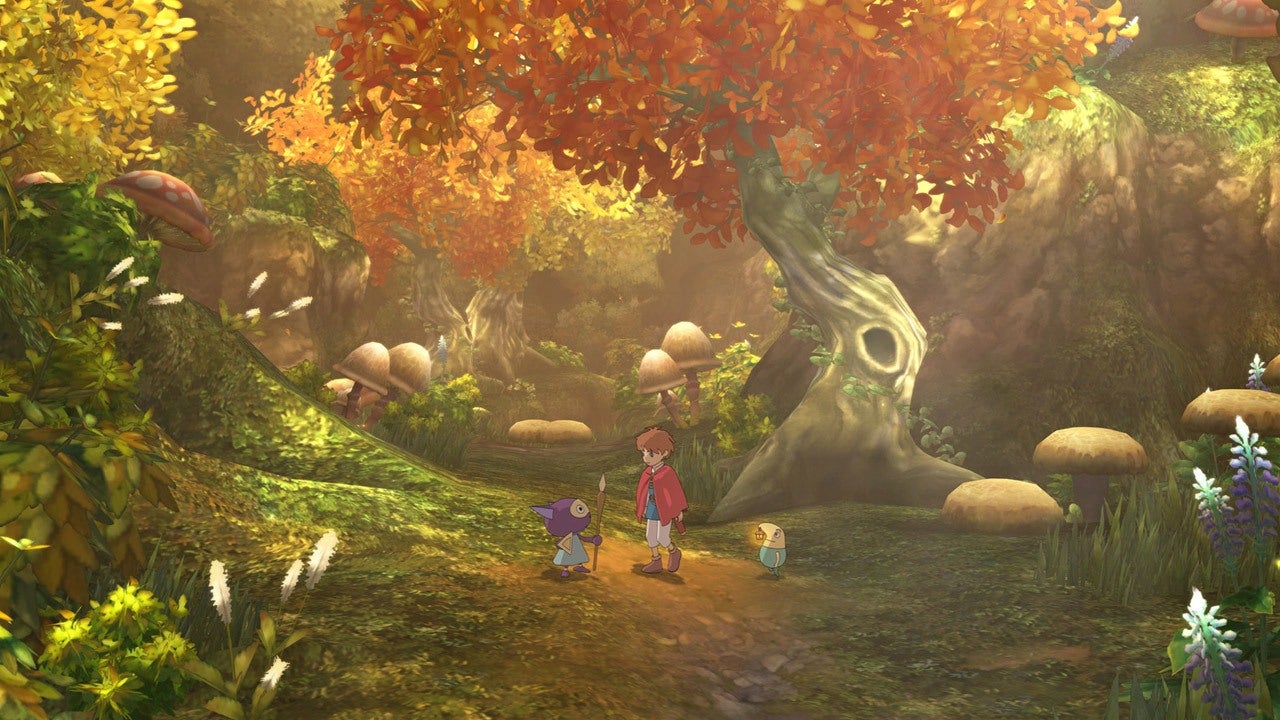 The most beautiful video games with Anime Art

Anime games have always looked good. It is a necessary part of their charm. Gameplay is important, but if you choose an anime-style game, chances are you will be part of it as much for the art style as it is for the action. It is for this reason that the visuals of anime games often hold up years later. Even with that in mind, there are some anime style games that are simply above the rest. Here are seven relatively recent examples of great anime-style illustrations in video games.

Let’s start with a simple one, okay? Ni no Kuni is an absolutely beautiful game, one of the best of the previous generation. The key is great art and some of the best cel-shading ever, with models that look a lot more like fully-made animated characters than the raw paper cutouts found in other cel-shading games. It’s amazing how close it is to being a real Studio Ghibli movie.

The other, less obvious strength of Ni no Kuni is its lush world map. In the days of 16- and 32-bit RPGs, it seemed like maps of the world would get more and more beautiful; but around the time of Final Fantasy X, developers started to prioritize a smoother experience. Ni no Kuni marks a throwback to the days of the classic JRPG world map with its lush hills, sparkling seas and scorching deserts. It’s a must-have for anyone with fond memories of the days of Final Fantasy VI.

Have you played Tales of Vesperia?

As long as we are talking about level 5, it is certainly worth mentioning one of the prettiest games on PlayStation 2. Dragon Quest VIII was the proto-Ni no Kuni – another JRPG with exceptional and unique cel-shading. art. Yes, it’s true that Akira Toriyama’s art can be a bit of an acquired taste – especially if you’re not a huge Dragon Ball fan – but there’s no denying that it’s at least interesting to watch. Monsters like Slime in particular really stand out – all bursting with life and personality, though they are little more than cannon fodder.

Dragon Quest VIII is almost ten years old now, but it still looks good enough for a PS2 game, even when played on a high definition TV. If there is one game that truly calls for an HD remake, it definitely would be this one. Interestingly, it was recently released in Japan for mobile devices; a bad replacement for a Full HD upgrade, perhaps, but it should look decent on the iPad. We will see for ourselves whenever it is released in the United States

Okay, one thing needs to be made clear from the start: Asura’s Wrath is not what you might call a “good game”. It actually has more in common with old FMV games from the ’90s than anything else, relying heavily on fast-paced events and long cutscenes to get its points through. But that doesn’t take away from the fact that it’s still so fun to watch. The visual style is reminiscent of the old Fist of the North Star anime, even featuring a god who can strike at high speed with what looks like a dozen or more arms.

In keeping with this tradition, Asura’s Wrath has its share of attacks capable of knocking Earth down from its axis and 300,000 mile long swords. It’s all while having fun; and more importantly, it is unique. With so many anime-style games designed for a particular look, it’s pretty nice to see an anime game that evokes the Shonen Jump feel of the mid-80s. Too bad there aren’t more games. like this one (sorry, Fist of the North Star: Ken’s Rage doesn’t really count).

It’s tempting to pick Persona 4 Golden here, because it’s a really great game on the Vita. But Persona 4’s graphics have always been more functional than pretty, choosing to focus on style and substance rather than pure flash. Persona 4 Arena, however, is a legitimately good-looking anime fighting game – certainly the finest of its kind.

Arc System Works is known for its beautiful anime fighters like Guilty Gear and BlazBlue, but they really went above and beyond in adapting the world of Persona 4 to the fighting game genre. Relying on sprites rather than cel-shading techniques, Persona 4 Arena is incredibly crisp, with a user interface that matches the aesthetic of the original series very well. The backgrounds aren’t as active as some you’ll find in Street Fighter IV, but they make up for it in detail and variety, borrowing a number of locations from the RPG while introducing a few of its own.

Like all of the fighters in Arc System Works, Persona 4 Arena is just plain fun to watch in general, with a really active style that goes well with the genre. Even if you are not a big fan of fighting games, they are at least worth checking out on Youtube.

No more great cel-shading, but what do you expect from games based on the anime? Valkyria Chronicles might not match Ni no Kuni in terms of visual splendor, but it certainly isn’t left out. And in fact, some people may find the more realistic art style of Valkyria Chronicles more appealing than the whimsical approach taken by Ni no Kuni or Dragon Quest VIII.

Interestingly, although it is quite conventional, the original art of The Chronicles of Valkyria was not what you would necessarily call a “cliché.” Its styling blends the aesthetics of WWI Europe with that of a military anime like the new Yamato 2199, giving an appealing look on both sides of the Pacific. Unfortunately, Valkyria Chronicles II eschews this approach for a more anime-like style like Bleach, which matches its more cliché high school setting. Sega has restored the balance somewhat with Valkyria Chronicles 3; but alas, this entry was never posted overseas, leaving what had the potential to be a classic RPG series with a mixed and complicated legacy.

Don’t worry, Tales fans, you are entitled to your due too. Tales games have long been known for their excellent graphics, which allowed the series to transition relatively seamlessly to the PlayStation 3 and Xbox 360 at the turn of the previous generation. In this, the series is quite unique among JRPGs, as even behemoths like Final Fantasy and Dragon Quest have had their share of struggles to take the plunge (Dragon Quest never even made it to the PS3, opting instead for PCs of poached).

You may wonder which Tales game looks the best all day long – even older entries like Eternia still look pretty good – but Vesperia gets the green light on Xillia and Graces for its superior character design and world. more dynamic. The towns of Xillia may be bigger and more interesting to look at, but it looks like Vesperia has a much wider color palette, which makes her more interesting to look at as a whole. Obviously, your mileage will vary; no matter what you prefer, the Tales series sets the standard for graphics for long-lasting anime-style RPGs.

Less known to the American public because the series hardly ever comes out as a western, Super Robot Wars nevertheless deserves to be among the most beautiful anime-style games of the current era.

Typically a mix of various robot anime series, SRW stands out for its seamless integration of several conflicting art styles, from the bonkers Gurren Lagan to the more circumspect Armored Trooper Votoms. Everything stands out for its excellent attack animations, which simply need to be seen in motion to be fully appreciated. No matter what platform the series is on, it still looks very good. This scene, for example, was rendered on the historically malnourished PSP. If that’s not an endorsement of the show’s tech chops, I don’t know what it is.

2nd Super Robot Wars OG gets the green light here due to the fact that it’s in high definition; but whether on PSP, PS2 or even on NIntendo DS (yes), Super Robot Taisen will remain a magnificent game. The upcoming release of Super Robot Taisen Z3 on the Vita should be glorious.

For more anime goodness, check out the six anime that we think would make great video games.