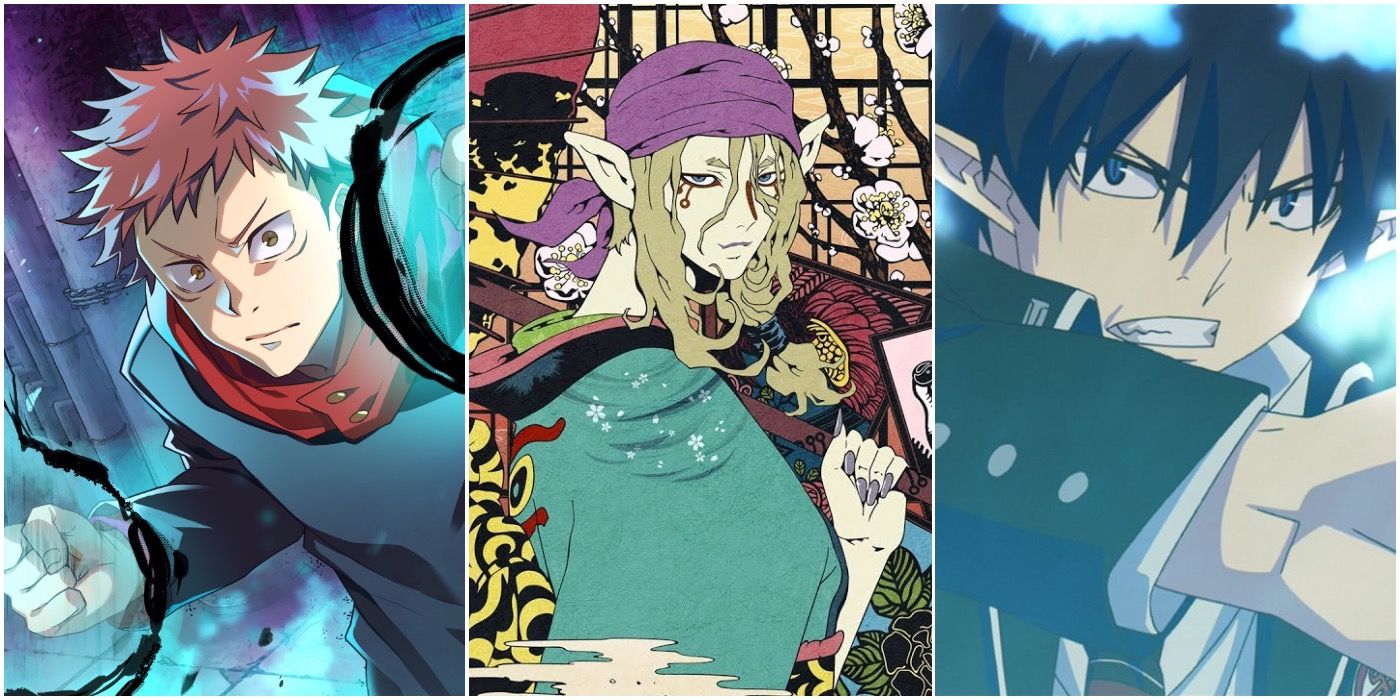 Strong conflict is the foundation of any narrative media piece, from ancient myths and legends to today’s big-budget blockbusters. In the contemporary model of literary conflict, there are only four main types of oppositions in dramatic structure. Nonetheless, the anime industry has a distinctive type of conflict that is very prevalent in the medium. It features the characters who oppose an otherworldly and unnatural force and can be called the human versus supernatural type of conflict.

Such anime explore the confrontations between humanity and the alluring and incomprehensible world of multifaceted paranormal beings. Some tales may portray the supernatural as purely evil, while others explore its unique place in the world. Nonetheless, the stories of humanity trying to co-exist and fight the occult are still jaw-dropping.

Ghost stories are one of the most popular types of supernatural stories in the media. Occult manifestations of human souls wandering the Earth, unable to settle or rest in peace, are part of many cultural myths and legends.

The horror-mystery anime ghost hunting is a perfect example of a classic ghost story, spooky yet incredibly seductive. The anime centers on Taniyama Mai, a schoolgirl obsessed with ghost stories. After accidentally serving as the Shibuya Psychic Research Company’s executive assistant at a haunted site, Mai is forced to replace him and join the company’s president in his mysterious ghost hunts.

Demon Salyer is rightly considered the Goliath of the modern shonen scene. This supernatural epic consistently breaks all records in terms of views and popularity, backed by the show’s stellar animation and simple, engaging narrative structure.

Humanity has suffered from the oppression of terrifying man-eating demons in the world of the series for centuries. The noble Ubuyashiki family formed the Demon Slayer Corps, an elite organization of swordsmen trained to execute demons and protect the human race from fighting these superhuman and violent creatures.

For early 2010s anime fans, blue exorcist was an iconic supernatural shonen, combining thrilling action with inventive and charismatic character writing. In the world of Blue Exorcist, demons are only able to travel to the human realm by possessing people. The protagonist of the story, a brash high school student Rin Okumura, has lived an ordinary life until one day he discovers the secret of his identity.

Unbeknownst to Rin, he is the son of Satan, placed on Earth as a pawn for his father to take over the world. Unfortunately for Satan, Rin isn’t interested in carrying out his plan, beginning the boy’s exciting journey as a demon exorcist.

The origins of dramatic conflict date back to ancient times, but the concept itself was present throughout the history of storytelling. The historical settings that are based on mythology are inspired by the roots of supernatural tales, going back to the legends of different countries.

In the case of Chrono Crusade, the story takes place in 1920s New York, a city suffering from an uprising of powerful demons. The Order of Magdalen was created to fight the epidemic, tasking an impulsive girl Rosette and a traitor to demonic society, Chrno, with their execution.

6 Vampire Hunter D turns the human vs. supernatural trope by making the protagonist a part-vampire

In anime, the task of executing evil supernatural beings is often given to those who are best suited to fight them due to their spiritual or physical connection to otherworldly forces. In some cases, demons, spirits, vampires and other supernatural monsters must go against their own parents to protect humanity.

The main character of Vampire hunter D is a half-human, half-vampire known as the “dhampir”. Outcast by both races, he made a name for himself hunting vampires in an effort to earn a place among humans.

5 The Vanitas Case Study Is Unlike Any Other Vampire Story

Vampire stories have been a popular subject of supernatural fiction for decades. Inspired by the admired mythological trope, The Vanitas Case Study creates a world where vampires and humans exist in the same realm. The anime’s protagonist, Noah Archivist, travels to Paris in search of the rumored gilmore, Book of Vanitas, created to retaliate against all vampires of the Crimson Moon.

On board the plane, he meets a man named Vanitas, but it turns out he has nothing to do with the legendary creator of the book. Pretending to be a vampire doctor, Vanitas forces her company on Noe, kicking off their exhilarating adventure.

The shonen dark fantasy genre has been taken by storm with the appearance of Jujutsu Kaisen, one of the most beloved action series of the current decade. The show is set in a contemporary world where people’s fears and negative feelings manifest in the form of supernatural beings known as curses. Most curses are stupid and unable to understand human speech, but some special level curses are completely sentient, almost indistinguishable from people.

RELATED: Jujutsu Kaisen: 10 Benefits Of Being A Curse

The only ones with the ability to protect the world from it are Jujutsu Sorcerers, humans able to see curses and manifest their own cursed energy to combat the supernatural threat.

3 Mononoke has an unusual perception of good and evil

Japanese folklore is full of enchanting, weird, and terrifying spiritual legends, which often inspire anime creators. The Supernatural Horror Series Mononoke celebrates the history of the occult in Japanese mythology. Following an unnamed exorcist known only as the drug salesman, the show explores various malevolent spirits created by humans’ negative feelings and the hero’s investigations into their cases.

With commendable precision and skill, the protagonist confronts the spirits, learning as much as possible about them to perform his bizarre exorcism. The series’ surreal and unconventional art style makes the alluring and terrifying stories featured in the anthology all the more effective.

The Chinese subgenre of cultivation fiction, or xianxia, ​​is a category of fantasy heavily inspired by the country’s mythology, religious practices, and folklore. While most xianxia stories come from books, they have a huge following in the donghua community, with some of the genre’s most popular works having been adapted for the screen in recent years.

Mo Dao Zu Shi was the first xianxia donghua to become a big hit in the West, making fans around the world fall in love with the enchanting story of cultivators battling demonic spirits, perfecting their craft, and uncovering their society’s political conspiracies.

Unlike most Men versus Supernatural anime, where the heroes perceive otherworldly beings as a non-negotiable threat, Mushishi sees it as a different but valuable part of the global ecosystem. In the universe of Mushishitiny, simplistic spirits known as mushi co-exist with humans.

Without malevolent intent, mushi can cause trouble or even tragedy for ordinary people. Nevertheless, the show’s protagonist, Ginko, follows in the footsteps of an unusual mushi activity in Japan, searching for the reason for their existence, their purpose, and a way to exist at peace with sentient beings. enchanting supernatural.

NEXT: 10 Anime That Used Silence To Talk Volumes